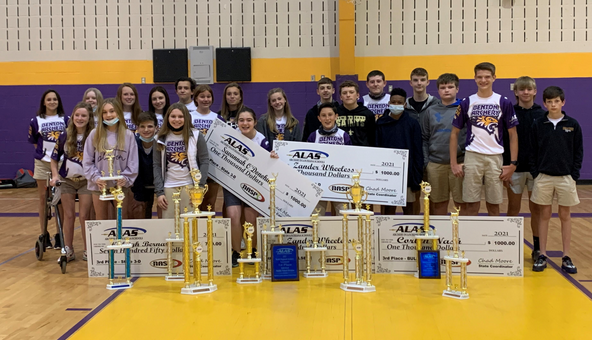 The push to get more youngsters outdoors and into outdoor sports has never had a bigger opportunity than in the sport of archery. Several high schools in Louisiana have developed exceptional archery teams and are doing great on the national level. It’s a sport that almost anybody can compete in with a little guidance and a lot of practice. If you are interested in taking part, or work at a school that would like to get going in this area, here’s a good place to start.

The Louisiana Department of Wildlife and Fisheries (LDWF) Archery in Louisiana Schools (ALAS) program faced unique challenges during the 2020-21 school year due to the COVID-19 pandemic. Nevertheless, ALAS still was able to instruct more than 11,000 students in 91 schools throughout the state. In addition, ALAS conducted its regional and state tournaments by modifying the tournament formats to maximize safety. All told, LDWF and participating schools held a total of 48 tournaments over a three-month period allowing 1,124 archers to compete regionally and 1,540 at the state level. Additionally, $20,500 in scholarships was awarded at the state tournament and 735 students were honored as Academic Archers.

The ALAS program, administered by LDWF and sponsored by the Louisiana Wildlife and Fisheries Foundation, is part of the National Archery in Schools Program (NASP), which teaches international target archery skills to students in grades 4-12.

“Our ALAS program has done an excellent job through the years introducing students in Louisiana to not only archery basics but also how that connects with what we do at LDWF,’’ LDWF Secretary Jack Montoucet said. “This was a difficult year because of the pandemic but I was so proud of how our staff, led by ALAS Coordinator Chad Moore, was able to still conduct the program in so many schools despite the headwinds we faced. I want to thank everyone involved for helping to bring it together and make it a success.’’

Louisiana was able to compete in the NASP National Tournament as it was held virtually this year. Louisiana also sent competitors to the NASP Open Tournament, held in Myrtle Beach, South Carolina in June.  Benton Middle School had an impressive season, winning the NASP Open 3-D Championship. It also finished second in the NASP National Middle School division Bullseye and 3-D tournaments as well as winning the state bullseye and 3-D championships.

Benton Intermediate won the state elementary 3-D and bullseye titles and finished fifth in nationals in the bullseye division and second in 3-D.

For complete results of all tournaments, go to https://nasptournaments.org/default.aspx.

The ALAS/NASP program is available to all schools in Louisiana and grants are available to assist with equipment purchases. For more information about the ALAS program, contact ALAS State Coordinator Chad Moore at cmoore@wlf.la.gov or 318-230-4352.