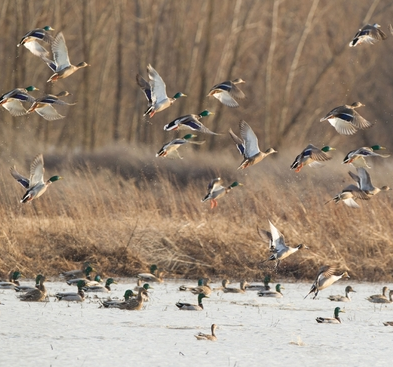 The Louisiana Wildlife and Fisheries December migratory waterfowl estimates are in and things look much better than last month. The 2.21 million ducks estimated on this survey is over 2.5 times the 855,000 seen in November, but it was 14% below last December’s estimate and the most recent 10-year average of 2.57 million and remains 21% below the long-term December average of 2.79 million. That should mean better hunting in the opening week of the second split.

A total of 139,000 ducks and 264,000 geese (212,000 white geese and 52,000 white-fronts) were counted in selected habitats in NE LA during the traditional cruise survey that was standardized in 2005. Because data from this survey were incomplete last month because of equipment malfunction, and last December because poor weather cut the survey short, valid comparisons can’t be made between this survey and those periods. Indeed, this NE December survey has not been completed 5 times since 2005, so comparisons with averages may be suspect. Given that, counts from this survey were 36% below the average from completed surveys of 218,000 for ducks, but 39% above the average of 190,000 for geese in December. Gadwall (42,500) and green-winged teal (32,500) were the most abundant species, and with pintail (19,500) and mallard (12,200) made up 77% of the ducks counted on this survey.

The largest concentrations of ducks were seen in flooded fields in the Bunkie/Grand Cote area, where over half the total ducks were seen. Other concentrations were noted at Catahoula NWR, the fields east of Hebert, and between Bonita and Mer Rouge. Similarly, for geese, the largest concentrations and about half the total geese seen on this survey were in the fields in the Bunkie/Grand Cote area with other large flocks seen east of Russell Sage WMA northeast through the Bonita/Mer Rouge area. The rice harvest in Mer Rouge and Bunkie areas appears to be complete.  However, the blown-down rice that couldn’t be cut has attracted a very large number of snow geese.  Water on the landscape improved from November but remains slightly below average at the time of survey. Rainfall the following weekend was expected to further improve habitat conditions.

In northwest Louisiana, another 6,900 ducks were counted, primarily on the locks, lakes, oxbows, and fields along the Red River and Upper Toledo Bend reservoir. That is only 5% more than were counted in November, is about half the 13,300 counted last December, and is 33% below the December average of 10,350 since this survey was standardized in 2005. Ring-necked duck was the most abundant species (2,800), and along with mallard (1,250), gadwall (1,150), and green-winged teal (1,050) accounted for 91% of the ducks counted. The largest numbers were counted on the Red River between Locks 4 and 5, managed impoundments near Loggy Bayou, and the Lower Kane unit of Red River NWR. Habitat conditions were improved in fields and pastures from recent rain, but were still drier than in past years. Otherwise habitat conditions were similar to those reported in November with some traditionally-managed habitats and Bayou Pierre WMA still dry except from recent rainfall. Extensive salvinia coverage at Wallace and Black Lake at Campti remains, as do low water conditions at Grand Bayou and Lake Bistineau.

The 76,000 ducks counted at Catahoula lake, although a substantial increase from the 12,000 in November, is about half the 149,000 counted last December and 46% below the most recent 10-year average. Water level during the survey was nearly 2 feet above management target, markedly reducing foraging habitat for dabbling ducks. Another 21,000 ring-necked ducks were counted on adjacent Catahoula NWR during the NE LA survey.

With the exception of Catahoula Lake, habitat conditions have improved since the November survey. Acknowledging the negative effects of multiple hurricanes on food availability, water levels have fallen across most of the coast, providing better access to existing food resources for dabbling ducks. Strong north winds during most of the survey created mudflat conditions in some tidal habitats. In the agricultural habitats of SW LA, recent heavy rainfall increased shallow flooding in many fields and pastures, but it didn’t appear extensive enough to last, and otherwise, flooding is limited to managed water, much of it with active crawfish farming activity.

With multiple cold fronts since the November survey, creating conditions favorable for ducks migrating into our state, we have seen a substantial increase in ducks in 3 survey regions. However, the overall numbers remain below average. The December survey of LDWF coastal WMAs and Refuges reported total ducks were 25% below the 2004-2020 average for those habitats. Surveys earlier in December in Arkansas and Mississippi were well below average, and the most recent bi-weekly survey in Missouri continues to be below average. However, an aerial survey in Illinois reported counts from 43-50% above average, suggesting there are still ducks holding north in the Flyway. For geese, however, there may have been an increase to above-average numbers. In December, geese are only counted in NE LA and on some coastal Refuges. In NE LA, the total goose count was 39% above the December average, and over 1-million snow geese were reported on White Lake WCA.