Teal season is underway and while there are mixed reports, some folks have been having some really good shoots. If you haven’t been yet, you’ve still got a week+, so get out and give them a shot. If you need anything for the teal season, come give us a shout at the store and we’ll help you out.

About the Green-winged Teal

Green-winged teal breed from Alaska, across Canada, into the Maritime Provinces, south into central California, Utah, Colorado, Nebraska, Minnesota and Wisconsin. They prefer small, shallow permanent ponds near boreal forests that boast an abundance of emergent vegetation, but also nest in Prairie Pothole country or in areas with dense emergent vegetation. Female green-winged teal lay an average of 8-9 eggs.

DescriptionGreen-winged teal are the smallest of our North American dabbling ducks with a short neck and small bill. Male green-winged teal have a chestnut head with an iridescent green to purple patch extending from the eyes to the nape of the neck. The chest is pinkish-brown with black speckles, and the back, sides and flanks are vermiculated gray, separated from the chest by a white bar. The wing coverts are brownish-gray with a green speculum. The bill is dark slate and the legs and feet are dark gray. Female green-winged teal are mottled brown with a dark brown line that extends from the bill through the eye. The bill is dark gray and the legs and feet are olive-gray to brownish-gray.

Green-winged teal feed on seeds of sedges, smartweeds, pondweeds, grasses, aquatic insects, mollusks, crustaceans and tadpoles found while foraging in and adjacent to mudflats or while dabbling in shallow water.

From an all-time low of 722,000 birds in 1962, green-winged teal populations have grown steadily since.

Green-winged teal have an extensive wintering range, having been recorded as far north as Alaska and Newfoundland and as far south as northern South America. They are most abundant along the Mississippi and Central Flyways, where the coastal marshes and rice fields of Louisiana and Texas provide ideal habitat. Tidal creeks and freshwater marshes associated with estuaries are favored over more saline or open-water habitats. Green-winged teal are common winter visitors to Central America and the northern Caribbean, and occasionally south to Colombia. 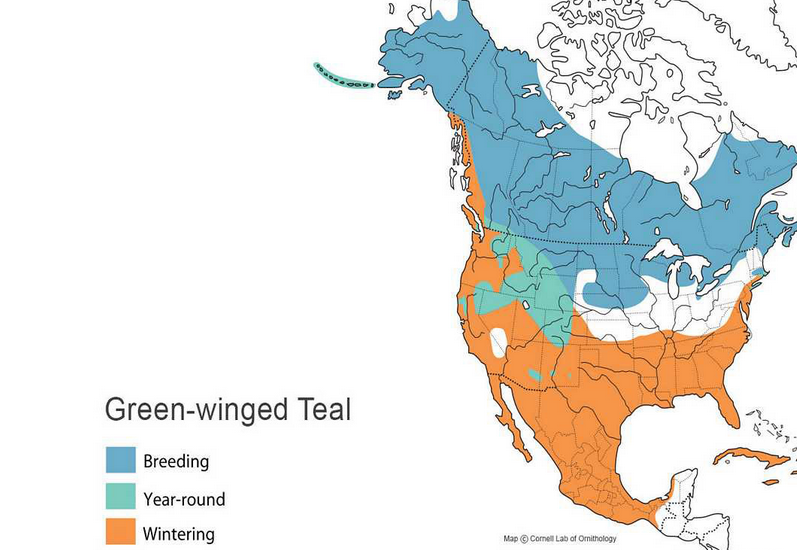