Home / Simmons Weekly Blog / Wow. What would you expect for 2020

First of all, we’ve got to believe it’s going to get better.

You know when a duck report starts like that you better keep reading. So goes it with the first Louisiana Department of Wildlife and Fisheries aerial survey for the Fall. Here’s the November word from state duck leader Larry Reynolds, a duck hunter himself.

Another 87,000 ducks and 70,000 geese (29% white-fronts) were counted in selected habitats in Northeast Louisiana during the traditional cruise survey that was standardized in 2005. Unfortunately, due to malfunction of one observer’s digital recorder, undiscovered until after the survey, these data are not complete and thus can’t be compared to past surveys. Pintail (31,300) and gadwall (30,200) were the most abundant species, and with green-winged teal (13,900) made up 87% of the ducks counted on this survey. Largest concentrations of ducks were seen in the flooded fields in the Bunkie/Grand Cote and Bonita/Mer Rouge areas as well as Delta Farms east of Catahoula Lake. The largest concentrations of geese were seen in the Bonita/Mer Rouge area accounting for nearly 2/3 of the total geese counted on this survey.

Despite recent high flows leaving water in the backwaters of most river systems in the surveyed area, the northeast region agricultural areas had a below average amount of flooded habitat even for this early in the fall.  The recent stretch of dry weather has allowed farmers that had completed harvest, to prep fields for next spring (disking, re-hipping rows, land leveling, etc).  Consequently, few fields were noted with stubble that might offer some waste grain opportunities if flooded.  There appeared to be an increase in rice acreage with several hundred acres still to harvest in the Mer Rouge area at the time of the survey. Tropical storm winds from weeks previous had blown an estimated 25% of the crop down, and we expect an increase in waste grain available to wintering waterfowl once flooded.

In SW LA, the only notable concentrations of ducks on the transects were a group of mostly scaup seen in flooded fields north of Intracoastal City and a flock of mostly gadwalls in the marsh of Paul J. Rainey/State Wildlife Refuge. Another concentration of ducks was noted near Black Lake west of Hackberry but was off-line and not included in the estimate. In SE LA, the only notable concentrations of ducks were ring-necked ducks east of the transect in Upper Terrebonne southeast of Amelia and scaup in Lake Borgne between lines 25 and 26.

Habitat conditions in all 3 surveyed regions have been negatively impacted by multiple hurricanes and other storms. Water levels are still high in most of the coastal marsh, there is virtually no seed-producing annual vegetation, and submerged aquatic vegetation is sparse across much of the surveyed area. Only spotty submerged aquatic vegetation was evident in SW LA. Good submerged aquatics were seen in the Upper Terrebonne marshes and south of Delacroix, but it was greatly decreased from the September survey in most other SE LA marshes. Water levels at Catahoula Lake have recently declined to target levels, but the abundant moist-soil vegetation and excellent habitat conditions noted in September were compromised. In contrast, there was noticeably less shallow flooding in the agricultural area of SW LA than seen in September. Most available habitat was managed water for rice and crawfish.

Despite early severe freezing conditions in Canada and the Dakotas again this year, which led to a major migration into mid-latitude states, recent warming trends appear to have stalled migratory movement into much of Louisiana. Although confounded by widespread poor habitat conditions along the coast, low duck numbers in south Louisiana and surprisingly few geese on the north Louisiana survey indicate we are early in the migration.

The survey in NW Louisiana was being flown later, and those data are not available. 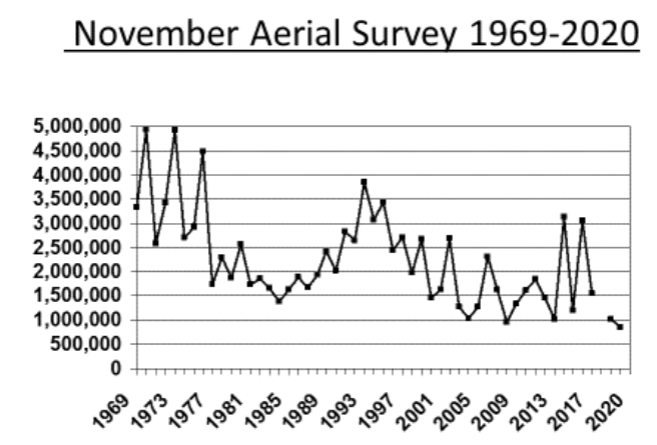