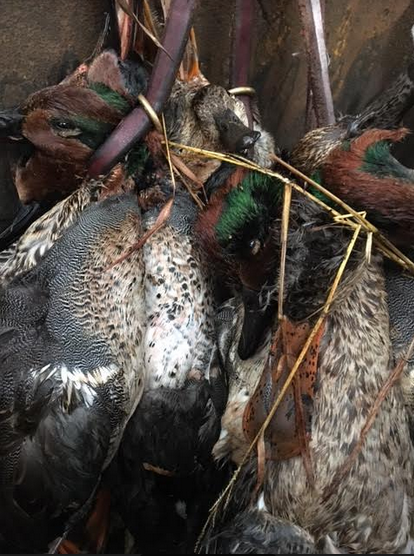 Today is the first edition of Simmons’ Sporting Goods Duck Report for 2019-2020. Teal season is here and there are a few good spots to teal hunt in our area of northeast Louisiana, but not many. Water is at a premium. Here’s a quick look!

Teal (Blue-winged, Green-winged and Cinnamon only) season opens in Louisiana Saturday, Sept. 14 and runs through Sept. 29. It’s hot. It’s dry and even though there are more birds this year than last across the state, it could be tough going for opening weekend. The largest groups of teal spotted so far are in south Louisiana, as expected. Limit is six per day with a possession limit of 18 for teal.

The estimate of 127,000 blue-winged teal from this survey is over twice that of last year’s estimate of 59,000, but is 20% below the most recent 5-year average of 158,000 and 45% below the long-term average of 230,000.
Most bluewings were counted in the agricultural habitat of SW LA. No big concentrations were encountered during the survey, but notable flocks were seen in rice fields north of Lacassine NWR, southwest of Gueydan, and north of Intracoastal City. Only a few small scattered flocks were seen in coastal marsh. Similarly, in SE LA a few small scattered flocks were seen throughout the marsh with largest numbers in the brackish marsh southwest of Myrtle Grove and the fresh marsh east of Venice.

Habitat conditions in coastal LA have declined compared to last year at this time due to the long period of high water during spring and summer. Although water levels have declined recently, they are still slightly higher than average in the coastal marsh. Consequently, conditions have not been conducive to germination and growth of seed-producing annual vegetation, and very little of it was seen during the survey.

Habitat conditions at Catahoula Lake are in slightly poorer condition than last year at this time. After an extended flooded period, the lake has been drawn down to slightly below management targets and most of the lakebed and conservation pool are dry. Growth of moist-soil vegetation is variable across the lakebed, but appeared sparse in many locations. Some additional time and some rainfall may improve growth, and as always, habitat conditions for migrating and wintering ducks will depend on maintaining water-level targets.

Stay tuned. We’ll be bringing you regular duck hunting and other outdoor reports on this blog as the seasons progress.